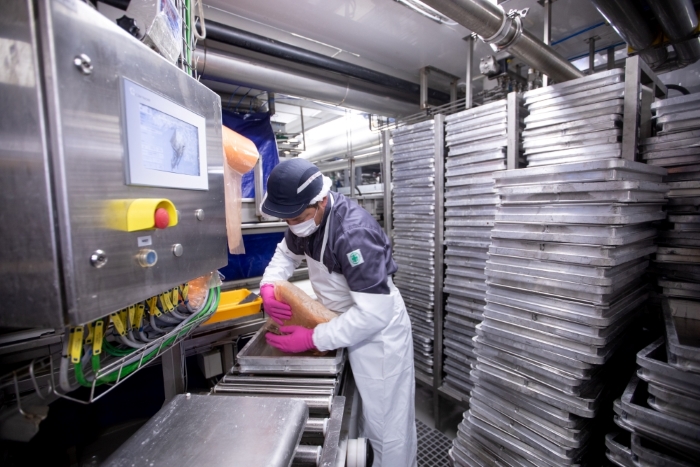 An expert from Daisui, a key surimi sales partner of the Russian Fishery Company in the Japanese market, assessed the production of surimi by RFC. After 30 days of work on board the Vladimir Limanov supertrawler, Daisui Executive Officer Kenichiro Furuno highly praised both the technology and the quality of the product.

According to Mr. Furuno, the surimi production equipment of new generation operating on the RFC’s supertrawler makes it possible to save labor, efficiently use the production area and optimize the production process control. Foreign objects protection by using production lines of closed type ensures a high level of safety. Strict compliance with sanitary requirements is ensured by the CIP (cleaning in place) system, with which mechanisms that require cleaning are equipped.

“The production process is organized at a high level, allowing the stable production of surimi, which is a safe and high-quality raw material for food. At the same time, I see the potential for further improvement, for the integration of the best practices and approaches of Japanese manufacturers, the Japanese culture of surimi production. RFC specialists got acquainted with our experience and developments at the training seminars that we organized on board and continue to conduct to satisfy the vigorous aspirations of the Russian team. I can say that technologies that allow ensuring the target quality and volume of production, as well as technologies for the efficient use of resources, are improving day by day.”

Mr. Furuno noted the high quality of surimi produced by RFC, both of high grade (A, AA) and ordinary grade (B, C). As the expert emphasized, "the quality of an ordinary product is close to premium and exceeds the existing requirements."

Sales of the RFC’s surimi have already started in Japan. According to Mr. Furuno, the company's product has begun to gain a good reputation in the Japanese market, which has a long history of production and use of frozen surimi, as well as a strict approach to assessing its quality.

“I think that RFC’s surimi will be well received not only in Japan, but also in the world. The company will be one of the largest producers of this product. Daisui, for its part, will focus on its promotion and sales, with a good understanding of the quality and quantity required by the market and considering their composition. We will progressively increase our presence in the market and our brand awareness.”

An agreement with Daisui on cooperation in the development of sales of RFC’s surimi products in the Japanese market was signed at the end of 2021. Under the agreement, Daisui becomes a strategic sales and marketing partner for surimi in the Japanese market for RFC. In turn, RFC becomes Daisui's strategic Pollock surimi supplier. The parties expect to take a leading position in the Pollock surimi market in Japan.

Previously, RFC’s surimi was highly appreciated by the Russian partners of the company. Specialists of the Far Eastern seafood producer KVEN JSC, one of the first buyers of RFC’s surimi, noted that RFC’s product is of high quality and is not inferior to Japanese in terms of its chemical and biological parameters.

Was the news helpful? Share it on social networks or send it by e-mail so as not to lose.
Related news
Olga Naumova: Useful high-value-added products are a prospect for Russian fish exports
Russian Pollock’s products appeared on Aeroflot flights
RFC and Daisui signed long-term agreement to develop surimi sales in Japan
RFC and COFCO Food Import signed an agreement to develop sales of Pollock fillet and surimi in China
Contacts for mass media
+7 (495) 777 5450 ext. 5049
+7 (423) 222 78 78 ext. 7167
pr@russianfishery.ru