Participants of the VII Eastern Economic Forum and guests of the capital of the Far East can taste Far Eastern pollock right during a flight. Aeroflot’s in-flight menu now includes wild white fish from the Russian pollock factory. 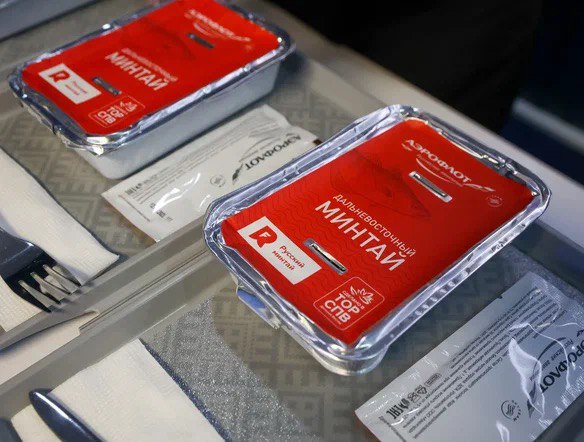 “The project is important from the standpoint of the perception of the Far East and promotion of goods produced by residents of priority development areas and the free port to the market.”

Yuri Trutnev, Deputy Chairman of the Government of the Russian Federation

As part of the project, Aeroflot Airlines included the products of Russian Pollock LLC, a resident of the PDA Far East, in the in-flight menu on flights from Moscow and St. Petersburg to Vladivostok performed during the preparation and holding of the VII Eastern Economic Forum. The products are marked with a special mark of Far Eastern quality - “Made in the PDA FPV Far East”.

“Our company pays great attention to ensuring the food security of the country. It is important to make healthy, environmentally friendly white fish available to the Russian consumer. We are glad that Aeroflot passengers will be able to duly appreciate our Far Eastern pollock, which is tasty and rich in healthy elements.”

“In 2019, the Corporation for the Development of the Far East and the Arctic registered the trademark “Made in the PDA FPV Far East”. Today, every third resident who has put his business into operation uses this mark to promote his products and services. These are agricultural products, chocolate products, seafood, apartment buildings, crab catchers, medical, educational services and much more. The trademark attracts the attention of consumers and guarantees a special, Far Eastern quality. The new project is another step by the state towards business as part of the comprehensive support provided to residents of the Far Eastern preferential regimes.”

Nikolai Zapryagaev, General Director of the Corporation for the Development of the Far East and the Arctic

Russian Pollock’s products labeled with the local brand “Far Eastern Pollock” and “Made in the PDA FPV Far East” will be offered to Aeroflot passengers until September 10. According to the Aeroflot Airlines, about 50,000 passengers can taste Far Eastern products during a flight.

“We are always very demanding of the quality of service and products provided to our passengers during a flight. The presence on board of Aeroflot aircrafts of products labeled with “Made in the PDA FPV Far East” is a worthy seal of quality that will attract additional attention of passengers living outside the Far East. Aeroflot, being the largest Russian air carrier, including to the Far East, is aware of the importance of its social mission - to ensure the connectivity and transport accessibility of regions contributing to the territorial development and increasing the mobility of the country's population.”

At the moment, the products manufactured by the Russian Pollock factory are supplied to all regions of Russia: Primorsky krai, Moscow, Moscow oblast, Yekaterinburg, Krasnoyarsk, Novosibirsk, Irkutsk, Tatarstan, Bashkortostan, Ryazan, etc. The factory intends to expand the geography of deliveries to the domestic market.

Was the news helpful? Share it on social networks or send it by e-mail so as not to lose.
Related news
Olga Naumova: Useful high-value-added products are a prospect for Russian fish exports
RFC's surimi production highly praised by the key partner in Japan
RFC and Daisui signed long-term agreement to develop surimi sales in Japan
RFC and COFCO Food Import signed an agreement to develop sales of Pollock fillet and surimi in China
Contacts for mass media
+7 (495) 777 5450 ext. 5049
+7 (423) 222 78 78 ext. 7167
pr@russianfishery.ru