At the Admiralty Shipyards (St. Petersburg), a solemn ceremony of laying the keel of the fifth of ten fishing vessels, which will be built here for the Russian Fishery Company (RFC), took place.

Representatives of the Ministry of Industry and Trade, Rosrybolovstvo and Sberbank - the financial partner of the RFC in the implementation of the project – attended the ceremony. A commemorative plaque on the keel of the future trawler was installed by the General Director of the Russian Fishery Company Viktor Litvinenko, General Director of the Admiralty Shipyards Alexander Buzakov, Vice President, Head of the Department of Global Markets of Sberbank Andrey Shemetov, Director of the Department of the Shipbuilding Industry and Marine Equipment of the Ministry of Industry and Trade Boris Kabakov. 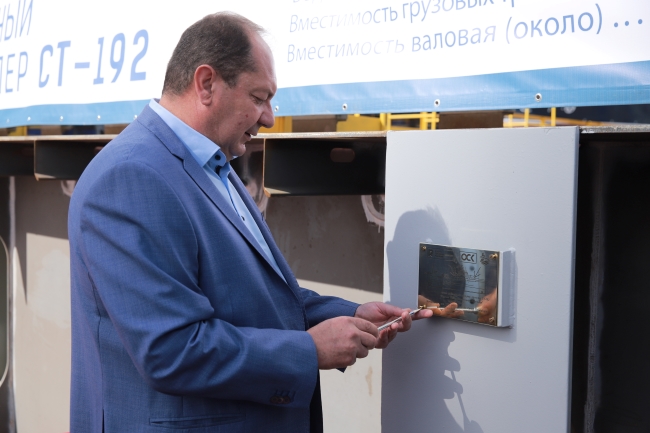 “The keel-laying of the fifth vessel of the series is, one might say, the equator of our project - a symbol of the fact that we are successfully coping with the ambitious task that we have set ourselves,” said RFC’s General Director Viktor Litvinenko. “The series of vessels that the shipbuilders of the Admiralty Shipyards are building for us are not just new trawlers, it is the future of the fishing industry: a new level of efficiency, environmental friendliness, product quality, and working conditions for our sailors.”

The series of fishing vessels for the RFC is the largest ordered to Russian shipbuilders. The first two vessels were launched in March and June 2020 and will be delivered to the customer in the coming months. The second pair of super trawlers will be launched this year.

The fifth supertrawler of the series is named "Кapitan Iunak" in honor of the veteran of the industry, hereditary sailor, former employee of the Russian Fishery Company Vladimir Mikhailovich Iunak (1948-2008)

“We are extremely grateful and proud that one of the supertrawlers of the company, to which Vladimir Mikhailovich devoted his entire professional life, will be named in his honor,” says the message from the relatives of Captain Iunak. - His son, Alexey Iunak, continues his father's business, works as a senior mechanic at the Russian Fishery Company. It will be a real happiness for us if the son of Vladimir Mikhailovich happens to work on a vessel named after his father! "

It is planned that the vessel will be launched in May 2022 and delivered to the customer in 2023.

The supertrawlers under construction for the RFC are one of the largest and most technologically advanced Russian fishing vessels. Each new vessel is designed for an annual catch of about 60 thousand tons of fish, which is 2.5 times higher than the productivity of the vessels that currently form the basis of the fishing fleet in the Far East of the Russian Federation.

The features of the new fleet will be significantly increased production capacity, maximum safety, high environmental friendliness and improved working and rest conditions for crews. The vessels will be equipped with a modern factory capable of deep waste-free processing of the entire catch into products with high added value, primarily Pollock fillets and surimi.

Energy-saving innovations are applied in the equipment of new vessels. The trawl complex includes electric wire rope winches that allow energy recovery and redirecting it to the needs of the main production and for general ship consumption, which will reduce fuel consumption. The fish meal plant will use steam produced by a boiler using fish oil as fuel and utilizing the residual heat of the exhaust gases. Thanks to these technologies and the reduction in fuel consumption of a modern engine, CO2 emissions per tonne of fish caught will be cut in half.

The construction of 10 vessels is carried out within the framework of the state program of investment quotas.