Supertrawler “Kapitan Vdovichenko” got under way for fishing from the Admiralty Shipyards in St. Petersburg

On September 21, at the Admiralty shipyards in St. Petersburg, a solemn farewell ceremony for the fishing supertrawler “Kapitan Vdovichenko” built by order of the Russian Fishery Company took place. It will have to move to its home port of Vladivostok along the Northern Sea Route and to the fishing ground in the Sea of ​​Okhotsk and the Bering Sea, the ship’s ice class makes this possible. 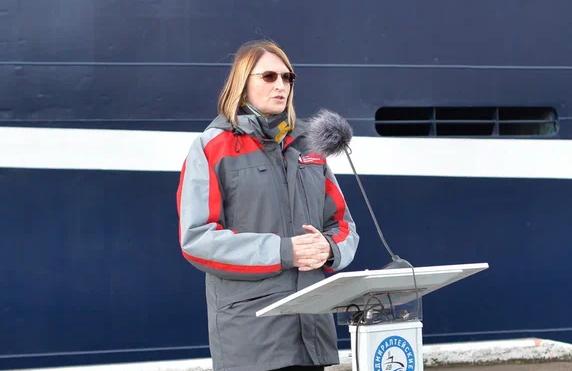 The ceremony was attended by State Secretary-Deputy Minister of Industry and Trade of the Russian Federation Viktor Evtukhov, General Director of the Russian Fishery Company Olga Naumova, General Director of the United Shipbuilding Corporation Aleksei Rakhmanov, Deputy General Director for Production of the Admiralty Shipyards Andrei Bystrov. In the presence of guests of honor and mass media, representatives of the shipbuilder and the customer made welcoming speeches, where they especially noted the importance of the event for the entire fishing industry in Russia. The master of the supertrawler reported on the ship's readiness for departure, and the crew received a memorable gift.

“Kapitan Vdovichenko” is one of the most modern fishing ships in the world, so-called supertrawler. Its hull belongs to the Arc3 ice class, which makes it possible to engage in fishing even in severe weather conditions of the Far Eastern seas. This is the prototype ship in the CT-192 project series. Its construction is carried out as part of the state program to renew the domestic fishing fleet and increase the efficiency of the development of valuable national biological resources. A series of supertrawlers will consist of 10 such ships. To ensure the further construction of all these ships, work is carried out to substitute foreign-make shipboard accessory components.”

“Supertrawler “Kapitan Vdovichenko” is an important step in the implementation of our strategy aimed at deep processing and creation of new high-quality products for our consumers. As a company, we were one of the first to take the vector to renew the fleet. For us, the new fleet is an opportunity to create and increase modern jobs, develop the prestige of the profession of a fisherman.”

“The trawler “Kapitan Vdovichenko” is a great success for the Admiralty Shipyards. This is an order that St. Petersburg shipbuilders can be proud of. With such ships, we help our country to solve the issues of ensuring food security, while at the same time preserving the natural resources of the seas for future generations. Outfitted with state-of-the art equipment, the large freezer trawler meets the highest environmental requirements. Handing over “Kapitan Vdovichenko” to the customers, we wish success to the crew, fishermen, for whom the shipbuilders have tried to create maximum comfort, opportunities for efficient work and good rest. Fair winds and following seas!”

Andrei Bystrov noted that the large fishing freezer trawler “Kapitan Vdovichenko” has a long way to go and serious tasks ahead: “I am sure that the ship will cope with them with dignity, lay a true course for expansion of capabilities of the fishing fleet of our country and strengthen its competitive advantages,” Director said. the large fishing freezer trawler “Kapitan Vdovichenko” is a real “pathfinder”. This is the first ship in the series. Thanks to the ice class, it will be the first of its class and type, which will take a passage from St. Petersburg along the Northern Sea Route. The trawler is able to go to the most distant areas from the coast. Capacities of the fish processing and fishmeal factories of this ship enable to produce 60-80 tons of fish fillet, 80 tons of surimi and 250 tons of feed fishmeal daily. I am sure that long-term experience and professionalism of the crew that will work on board “Kapitan Vdovichenko” will bring the declared figures in reality and strengthen the position of the Russian fishing fleet in the global ocean.

Moreover, “Kapitan Vdovichenko” is equipped with the state-of-the art fish processing equipment. It will enable to produce not only traditional pollock and herring, but also surimi, fish oil, and fishmeal.

Was the news helpful? Share it on social networks or send it by e-mail so as not to lose.
Related news
Factory sea trials of the second Russian supertrawler “Mekhanik Maslak” of the Russian Fishery Company have been successfully completed
Supertrawler “Kapitan Vdovichenko” set sail for a fishing trials
The Russian flag is hoisted on fishing super trawler “Kapitan Vdovichenko”
Russian Fishery Company goes on with fleet renovation
Contacts for mass media
+7 (495) 777 5450 ext. 5049
+7 (423) 222 78 78 ext. 7167
pr@russianfishery.ru