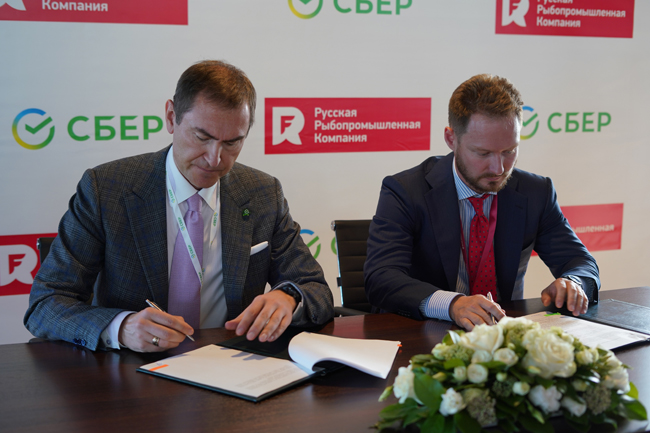 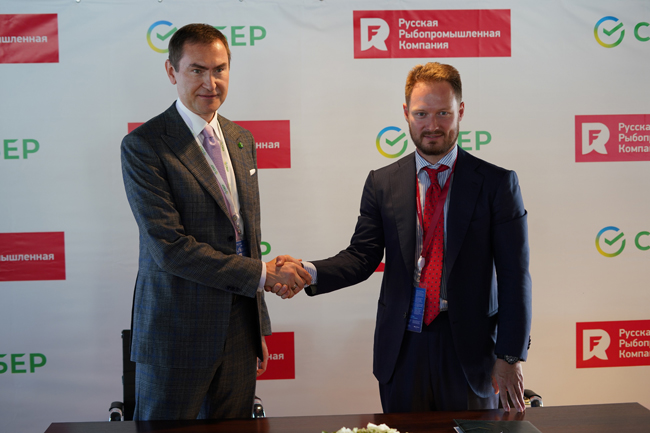 September 02, 2021, Vladivostok - During the Eastern Economic Forum Russian Fishery Company (RFC) and Sber signed a letter of intent to finance the construction of four large freezing fish trawlers in the amount of USD 400 million. The document was signed by Chairman of the Board of directors of the Russian Fishery Company Gleb Frank and First Deputy Chairman of the Executive Board of SberBank Alexander Vedyakhin.

Under this agreement Sber will act as a lender and financial partner of the enterprise. Fishing vessels are planned to be built in Saint Petersburg. All-in-all eleven supertrawlers — the largest and most technologically advanced Russian fishing vessels — will be built for RFC. The first vessel has already undergone field tests. Six more vessels are at various stages of completion at Admiralty Shipyards (three vessels have been set afloat, factories are being assembled). The new agreement will give impetus to the construction of four more vessels. After being set afloat all trawlers will head to Primorye region to add to RFC’s fishing fleet.

“Today is a milestone for us: we have financed four out of eleven vessels where Sberbank is a partner of construction. Thus we are closing the financial package for the whole programme of our new building. The new vessels are called supertrawlers for a reason. They are super efficient: not only are they able to catch 60 thousand tons of fish per year but they efficiently process it. Unlike the existing vessels, the new ones are able to make products for the final markets – fillet and surimi. They are super sustainable: fresh water use is reduced to zero, a supertrawler’s carbon footprint is the lowest among fishing fleet vessels. Within 4-5 years we should receive the remaining vessels of the line.”

Gleb Frank, Chairman of the Board of directors of the Russian Fishery Company

“Russian Fishery Company is Sber’s long-term partner, and this is not our first agreement. We are happy to invest in a company that intensively develops fishing fleet in the Far East and is one of the large employers in the region. Apart from the new supertrawlers’ power and fishery efficiency, it is worth noting that they comply with the sustainability principles Sber is committed to.”

Alexander Vedyakhin, First Deputy Chairman of the Executive Board of SberBank

RFC is one of the largest producers of Pollock globally. The company is among the three leading Russian producers of wild white fish. The main harvested species are Pollock and Pacific Нerring. RFC is engaged in fishing in the far Eastern fisheries basin. The Company’s large fishing vessels are well suited to work in all fishing areas and under all climate conditions. They are equipped with modern fishing and processing equipment from leading international suppliers that enables the vessels to harvest different types of seafood. Strategic goals of the Company involve increasing the output of high value-added products due to building of new, state-of-the-art supertrawlers.

RFC is building a new fleet of 11 supertrawlers. Each trawler is designed for an annual catch of more than 60 thousand tons of fish, which is 2.5 times higher than the productivity of vessels that are today the basis of the fishing fleet in the Russian Far East. The first of supertrawlers to be built for the RFC was handed over to the company in 2020.

PJSC Sberbank is Russia’s largest bank and a leading global financial institution. Holding almost one-third of aggregate Russian banking sector assets, Sberbank is the key lender to the national economy and one of the biggest deposit takers in Russia. The Government of the Russian Federation represented by the Ministry of Finance of the Russian Federation is the principal shareholder of PJSC Sberbank owning 50% plus one voting share of the bank’s authorized capital, with the remaining 50% minus one voting share held by domestic and international investors. Sberbank has customers in 18 countries. The bank has a major distribution network in Russia with about 14,000 branches, while its international operations – subsidiary banks, branches, and chapters – include the UK, US, CIS, Central and Eastern Europe, India, China, and other countries. It holds general banking license No. 1481 dd. August 11, 2015, from the Bank of Russia. Official websites of the bank:  www.sberbank.com (Sberbank Group website),  www.sberbank.ru.

In 2020 Sberbank underwent a rebranding, offering financial and non-financial services of the bank and Sberbank Group to individual and corporate customers. Today, the Sber ecosystem is a raft of services for life and daily assistance in handling pressing everyday issues for individual customers and businesses. The Sber ecosystem website: www.sber.ru.