Deck equipment Installed on the lead supertrawler for the RFC in St. Petersburg

On the lead supertrawler "Kapitan Vdovichenko" from a series of vessels that are being built for the Russian Fishery Company (RFC) at the Admiralty Shipyards (St. Petersburg), the installation of fishing and cargo deck equipment has been completed. In the near future, the main engine will be launched, the installation of the fish meal plant is also nearing completion, and the fish processing plant will be installed in early summer. 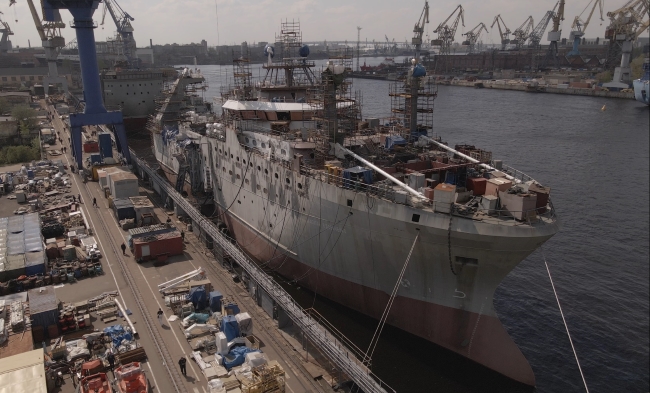 “As the installation and connection to the systems and power supply are completed, a complex of equipment mooring tests is carried out. This is the final stage of construction before the vessel is handed over to the customer, - commented Dmitry Sapov, RFC’s director for the construction of the fleet. - With a gap of three months, similar work is being carried out on the second vessel of the series - "Mechanic Maslak".

As previously reported, energy-saving innovations have been applied to the equipment of the new vessels. The trawl complex includes electric wire rope winches that allow energy recovery and redirecting it to the needs of the main production and for general vessel consumption, which will reduce fuel consumption. The fish meal plant will use steam produced by a boiler using fish oil as fuel and utilizing the residual heat of the exhaust gases. In addition, fish meal plant will provide an increased flour yield due to the additional process of protein recovery from the press liquid.

In order to ensure careful handling of biological resources, a catch weighing system has been installed, that makes it possible to measure the volume of fish caught, which excludes its dumping into the sea and thus serves to preserve the population.
Was the news helpful? Share it on social networks or send it by e-mail so as not to lose.
Related news
Factory sea trials of the second Russian supertrawler “Mekhanik Maslak” of the Russian Fishery Company have been successfully completed
Supertrawler “Kapitan Vdovichenko” set sail for a fishing trials
Supertrawler “Kapitan Vdovichenko” got under way for fishing from the Admiralty Shipyards in St. Petersburg
The Russian flag is hoisted on fishing super trawler “Kapitan Vdovichenko”
Contacts for mass media
+7 (495) 777 5450 ext. 5049
+7 (423) 222 78 78 ext. 7167
pr@russianfishery.ru