The first of a series of super-trawlers of the new generation for Russian Fishery Company was laid out. Construction is conducted by Admiralty Shipyards. In terms of performance and other technical and operational characteristics, the future vessel will surpass its existing analogues in the country. 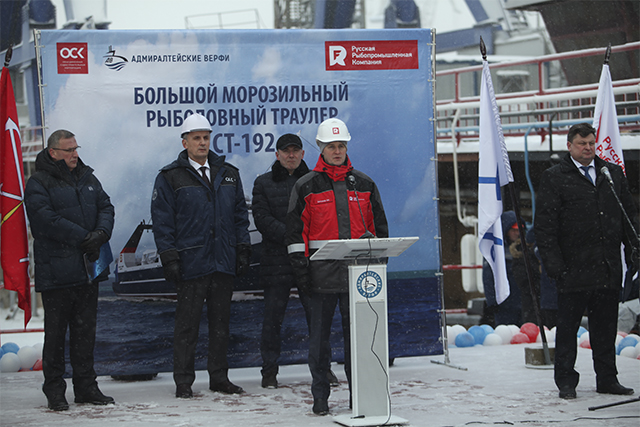 “Today’s event will undoubtedly become one of the brightest pages in the history of not only the Russian Fishery Company, but also the entire industry, which has long awaited such a breakthrough,” commented RFC CEO Fedor Kirsanov. - Together with the Admiralty shipyards, we are reviving the traditions of domestic civil shipbuilding, we are starting construction of a whole series of modern high-performance fishing vessels. Until 2023, the Admiralty shipyards will build six super-trawlers. New vessels are built under the investment quota program, under which the RFC has applied for the construction of three more similar trawlers-processors. Due to the large-scale fleet renewal, the Company will significantly increase the efficiency of the fishery and strengthen its leadership position. ”

Also, the company started cutting metal for the second trawler. The whole series will be built in pairs, two vessels a year with an interval of three months between the bookmarks and the gap of about a year between pairs. The launch of the first two trawlers is scheduled for the first half of 2020.

Each new vessel, which will be built for the Russian Fishery Company, is designed for an annual catch of more than 50 thousand tons of fish. This is twice as much as the performance of the ships that make up today the fleet of the RFC and many other Russian companies operating in the basin. The vessels will be equipped with a modern factory capable of carrying out deep waste-free processing of the entire catch into high value-added products, primarily Pollock fillets and surimi. The capacity of such a factory for the production of high added value products is more than doubled compared with analogues.